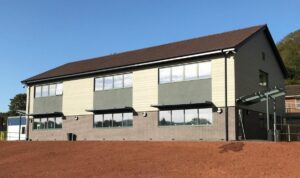 A new maths block which will provide extra space for additional pupils opens at Paignton Academy.

Torbay Council provided funding for five new classrooms and the remodelling of existing space to accommodate more pupils for this academic year.

The exciting new development was project managed by TDA, part of the TDA. The contractor was Midas Construction, part of the Midas Group.

Stephen Kings, CEO of the Bay Education Trust, said: “Bay Education Trust is delighted with the new Mathematics Building that has been opened at Waterleat Road. The Trust has worked very closely with Midas and TDA throughout the duration of the project and any potential problems caused by the Covid-19 Pandemic have been overcome by close teamwork, collaboration and partnership. The building is a superb facility for learning that has been delivered on time and on budget.”

The new facilities are part of an agreement between Paignton Academy and Torbay Council for the school to take an extra 30 pupils per year. This will increase their numbers from 300 to 330 per year group, with a further 30 places per year to be admitted from next year.

Mark Smith, Head Teacher at Paignton Academy, said: “This is another excellent facility which will provide the students with high class maths classrooms. Thanks to TDA and Midas for yet another well managed project.”

This development follows the completion of The Arena, a £3m multi-use event centre which was officially opened earlier this year. The Arena was also built by Midas Construction. The campus has also benefitted from new laboratories and IT classrooms. This means the school can accommodate more students with modern, purpose-built spaces.

Clare Talbot, Education Team Manager at TDA, said: “We continue to work with Paignton Academy to provide extra school places and meet the developing needs of the school. Each project has been a great success and will benefit children and young people from across the Bay.”

Mike Borkowski, Business Development Director at Midas Construction, said: “Through the course of our previous work at the Academy we have built strong relationships with the school and the local community. We are delighted to again be working alongside our customers TDA and Bay Education Trust.

“This exciting project represents yet another significant enhancement to the facilities at this growing school. We are looking forward to students and staff benefitting from using these new facilities.”

Schools that wish to improve their facilities can contact Clare Talbot at TDA. Email clare.talbot@tda.uk.net or call 01803 208220.

We use cookies on our website to give you the most relevant experience by remembering your preferences and repeat visits. By clicking “Accept All”, you consent to the use of ALL the cookies. However, you may visit "Cookie Settings" to provide a controlled consent.
Cookie SettingsAccept All
Manage consent

This website uses cookies to improve your experience while you navigate through the website. Out of these, the cookies that are categorized as necessary are stored on your browser as they are essential for the working of basic functionalities of the website. We also use third-party cookies that help us analyze and understand how you use this website. These cookies will be stored in your browser only with your consent. You also have the option to opt-out of these cookies. But opting out of some of these cookies may affect your browsing experience.
Necessary Always Enabled
Necessary cookies are absolutely essential for the website to function properly. This category only includes cookies that ensures basic functionalities and security features of the website. These cookies do not store any personal information.
Non-necessary
Any cookies that may not be particularly necessary for the website to function and is used specifically to collect user personal data via analytics, ads, other embedded contents are termed as non-necessary cookies. It is mandatory to procure user consent prior to running these cookies on your website.
SAVE & ACCEPT